Register for more free articles. Sign up for our newsletter to keep reading.

LINCOLN, Neb. — Graham Mertz’s role as the University of Wisconsin’s quarterback was in jeopardy against Nebraska on Saturday.

Badgers interim coach Jim Leonhard said after the Badgers struggled in the first half and failed to score before the break, coaches discussed benching the redshirt junior who has started each game for the team since the start of the 2020 season. The team needed a spark, Leonhard told reporters, and seeing what senior backup Chase Wolf could give the offense was an option.

But Leonhard opted to keep Mertz under center in the second half. Mertz repaid the faith placed in him with two touchdowns in the fourth quarter, including a winning quarterback sneak with less than a minute remaining to lift UW to a 15-14 win over the Huskers.

The win made UW 6-5 and 4-4 in Big Ten play, extended the program’s win streak over Nebraska to nine games and made the Badgers bowl eligible for the 21st consecutive season. It was UW’s first fourth-quarter comeback win since 2018.

Mertz and the offense didn’t score in the second half at Iowa last week, meaning the first-half shutout made four consecutive scoreless quarters for UW. Mertz’s interception in the second quarter ended a drive that had crossed midfield and had scoring potential. Mertz had receiver Skyler Bell open for a potential touchdown, but a strong wind coming out of the north end zone killed his throw’s progress and it turned into a pick. Worse yet, Mertz had an easy throw to Chimere Dike available for a first down, but he decided to be aggressive downfield.

Nebraska (3-8, 2-6) scored eight plays after the interception, which was returned to UW’s 37-yard line.

“Whenever it’s like that, I mean, it’s not a surprise or a shock,” Mertz said when asked about potentially being taken out. “It just all comes back to doing your job. That’s what everybody on the offense kept talking about. … It never really affected me. In the end, you’ve just got to execute.”

Mertz missed some practice time due to hits he took against Iowa but declined to specify when or how much. He admitted his interception frustrated him. But teammates said they didn’t see a difference in Mertz after the bad play.

“He always responds,” Bell said. “Even when he threw the pick, his first thing was, 'I’m coming back to you.' He’s a confident kid.”

Mertz tallied 64 of his 83 yards passing in the second half, highlighted by a 10-yard touchdown pass to Bell early in the fourth quarter and a pass for 27 yards to running back Isaac Guerendo on UW’s final drive. Mertz had to adjust to make both plays.

Bell’s touchdown was essentially a broken play, one on which Mertz rolled to his right to the top of the numbers on the field. Mertz said he didn’t have a clean path to get the ball to his first option, which was Dike, so as he rolled he looked to Bell running in the end zone.

“As soon as I saw (Bell) transfer his weight, I let it go because I knew he was working back," to the middle of the field, Mertz said. “It was a great play by Skyler. That’s just having a feel for the game and knowing how to play.”

Polzin: Hire Jim Leonhard now. He has earned the job

Mertz’s pass to Guerendo was on a play he said has been successful for other teams that have faced the Huskers (3-8, 2-6), and Guerendo made a move inside his defender on the outside to get free. That throw, and the significance of the play, impressed Leonhard.

“Getting a chunk (play) changes everything,” Leonhard said. “Graham being able to extend the play and trust it, Isaac’s a dynamic athlete out in space and big time for him to come down with that catch."

Mertz putting together enough plays ensured a stellar effort from the Badgers’ offensive line, running backs and defense didn’t go to waste. The Badgers had 235 yards rushing on 52 carries (4.5 yards per rush) and allowed just one sack. Sophomore tailback Braelon Allen has been battling a left shoulder sprain, one that Leonhard says won’t truly heal until after the season, and injured his right ankle midway through the fourth quarter and didn’t return. Allen said his ankle was tender but believes he’ll be ready to go next week against Minnesota.

He gained 92 yards on 18 carries but frequently returned to the sideline after runs with his left arm hanging at his side. He said he’s tried to get some hits in during practice so he knows what to expect, but it’s been difficult to play through.

“You know it’s going to hurt, nothing you can do about that,” Allen said. “Just keep playing.”

Senior Chez Mellusi, who had missed four games since fracturing the radius bone in his right arm just below his wrist against Northwestern, had his best game of the season for UW. His 98 yards and 21 carries were both season-bests, and his addition allowed the offense to continue moving the ball with the run despite Allen’s injuries.

Mellusi tore his ACL last season and fought to be ready for the opener this year, so he knew the grind that rehabbing an injury would be.

“Once you have some pretty serious injuries, you start to not take the game for granted,” Mellusi said. “This game, you give it all and sometimes it doesn’t get it back. Missing any time, I was just grateful to be out here today and give the guys everything I have.”

UW’s offensive line got good surges off the ball and opened holes between the tackles. Left guard Tanor Bortolini, who helped create the lane for Mertz’s scoring run, said Mellusi’s willingness to fight through contact is invigorating for the offensive line.

Badgers linemen spoke this week about Nebraska’s front being similar to UW’s and how that could be an advantage, and Bortolini believes UW’s control of the ball — 70 plays to Nebraska’s 49 and a time of possession edge of nearly 37 minutes to 13 — wore down Nebraska.

How Wisconsin football's defense stepped up to replace ejected star

“We have that mentality that if we run the ball effectively and we can run it throughout the game, we’re doing exactly what we love to do, and hopefully they’re tired from that,” Bortolini said. “It really felt like that today. Toward the end when we really needed it, they made some adjustments. But I still felt like we were able to knock guys back, knock guys around and do what we needed to do.”

This wasn’t an offensive performance that UW wants to repeat, as the unit did just enough to avoid an embarrassing loss against a team playing for nothing but pride. But Leonhard believes the victory over Nebraska was a necessary one.

“I prefer easy (wins), but that’s not always the case,” Leonhard said.

“Any time you win and you have to battle for four quarters and make plays, come from behind, you just gain so much confidence from it. … Very proud of the way that we battled because we have not won a game like this yet this year.”

Related to this story

10 things we learned from Wisconsin football's narrow win at Nebraska

The Badgers became bowl eligible for the 21st straight season with a "gritty" victory over the Huskers that kept the Freedom Trophy in Madison for at least another year.

Wisconsin football secured the rivalry trophy with a 15-14 win after a pair of touchdown drives in the fourth quarter.

Columnist Jim Polzin took the pulse of Badgers fans on Twitter following the team's 15-14 win at Nebraska to get bowl eligible.

Here is your chance to offer grades for the Badgers' performance against Nebraska.

Wisconsin football's offense and special teams drag down the Badgers' grades in their performance against Nebraska.

3 things that stood out from Wisconsin football's win at Nebraska

The Wisconsin football offense came alive in the fourth quarter to ensure the Badgers reach bowl eligibility for the 21st straight season.

The Badgers scored two touchdowns in the fourth quarter and leaned on their defense to beat Nebraska.

Nick Herbig hit Nebraska’s quarterback in the head and was ejected from Saturday’s game in the third quarter.

Open Jim at half: How did Wisconsin football manage to get worse?

Even in one of Wisconsin's worst seasons, the Badgers met their expectation of making a bowl game. And they did it with great defense.

Topics covered after additional breakdown include a look at why the Badgers' screen passes failed, a senior DT dominating, an illegal block, and a defender ready for more snaps.

Badgers interim coach Jim Leonhard is hopeful the Badgers can get junior OLB Nick Herbig available to play the entire Minnesota game after being flagged for targeting last week. 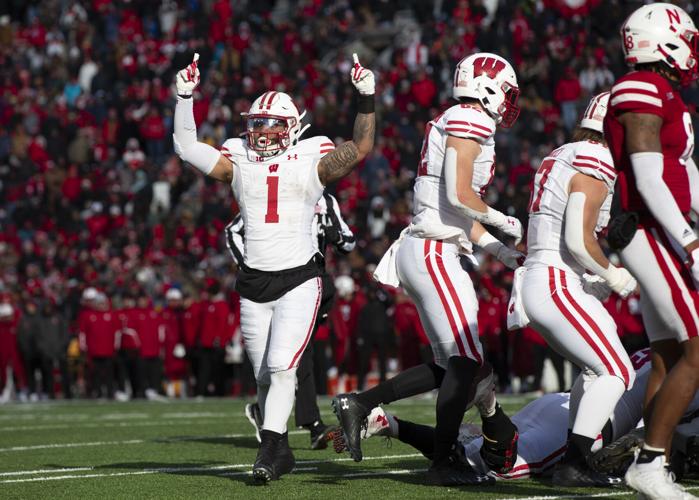 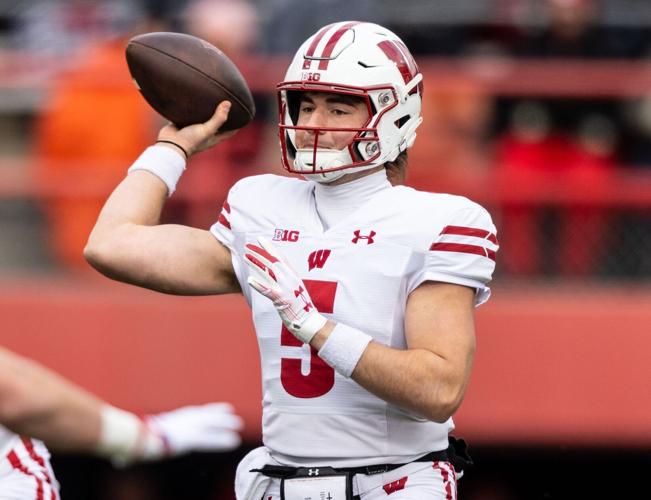 Badgers quarterback Graham Mertz throws in the first quarter Saturday at Nebraska. UW coaches considered benching the junior, but he made enough throws after halftime to lift the Badgers to a 15-14 win.